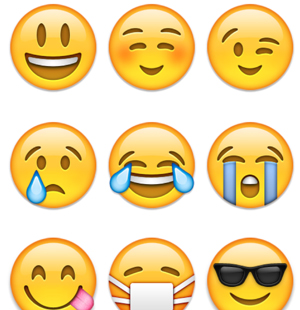 Whether you love them or hate them, emoji’s (also known as emoticons) appear here to stay! This theory follows from Facebook recently launching Facebook reactions – a feature which allows users to react to Facebook posts with a range of happy, sad and angry faces as a part of its ‘like’ option. What was once the teens shorthand form of expression, is now used by some of the world’s biggest brands to promote their products.  Sir Paul McCartney’s even composed music for a series of ‘audio emoji’s to celebrate Valentine’s Day. Since this form of communication which was once seen as child’s play, is now an established part of our literary lexicon… how can it help in the world of business?

Cyber-based exclamations are now seen as incomplete without the colourful symbols since they have been used on social media postings for over a decade. Recent figures show that 92% of the online population uses emoji’s, and Neil Patel, co-founder of the analytics companies KISS metrics, Crazy Egg and Quick Sprout, said the casual use of these colourful animations can be expanded upon by marketers to help bolster campaigns to the right audience. According to research, looking at an emoji smiley face has the same impact as looking at a real one – hence the relevance of a well-placed emoticon in a professional capacity. The research found that the newly accepted emoticons are being put to use in formal emails, and instead of inhibiting the sender’s credibility, they are helping create ‘positive expectancy’.

Patel insisted that the emoji’s should not be used ‘for having fun’, but instead users should consider their functionality before posting if they are to be used effectively. He pointed to a recent World Wildlife Fund (WWF) campaign retweets following its official launch – which featured emoji’s of 17 endangered animals and gained 34,000 retweets following its official launch – as an example of a well-executed emoticon-led awareness promotion. General Electric teamed-up with science educator, Bill, Nye to create short science videos using emoji’s which were also a wide success.

‘Emoji’s are a form of communication and are processed in our brains as non-verbal communication’ Patel insists. To get the right reaction from your content or promotion, he advises against applying emoticons too liberally. Just as verbosity should be avoided in word-from, so it must in emoji usage.

Although a few remain resistant to their charm, the future of emoji’s can be summed-up with a little smiley face.